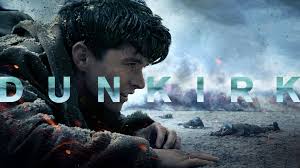 If it hasn’t been clear already, it must be completely obvious after the release of Dunkirk that without a doubt Christopher Nolan is one of most versatile, gifted, and influential directors of our generation.

Dunkirk is such a unique war movie. This is not like any other war movie you’ve seen before. Its narrative and subplots set it completely apart from other great recent movies in this genre like Saving Private Ryan , The Thin Red Line or even Inglorious Bastards. It’s relentless, breathtaking, thrilling, surprising, sad, joyful, scary (I can go on and on). You’re gonna be on a heck of an emotional roller coaster ride. Nolan does NOT give you a break; not even in a single scene. The vivid camera movements with a lot of close-ups, and the transition from a seemingly calm situation to an absolutely horrifying condition in a single scene are just examples of how this movie keeps you on your toes and gives you the feeling as if you’re actually in the middle of the Dunkirk Battle. There is no way you can miss a single scene without missing something significant in this movie. And to top it off, the soundtrack, composed by Hans Zimmer, elevates everything couple of notches. His composition for this movie is ingenious. The soundtrack is played almost constantly throughout the movie. It is so beautifully intertwined with the narrative to the extent that at points it morphs into the unspoken dialogues.

While on the surface it may seem that Dunkirk is about survival, to me, it is a movie about untold stories of a war. It’s about paradoxes surrounding a war. It’s about unknown heroes, their untold stories, and untold and unrecognized sacrifices. This movie essentially shows what we know about how things went down in a particular event is just a small subset of the reality of the situation, and more often than not, it’s not even the true story.

Gibson, the French soldier impersonating as a British soldier, saved lives by risking his own to open the hatch that was being inundated by water with Tommy, Alex and many other soldiers trapped inside. His heroic act was not only left unrecognized but also, he was later accused of being a German spy, and was suggested to be throne out of the ship by the very same guy (Alex) that was saved by him and Tommy earlier in the movie, and eventually died from drawing; ironic, isn’t it? George suffered an “accidental” death. One can argue Cillian Murphy for pushing George, and Mark Rylance for not turning the ship around, were responsible for his death. But in the middle of a crisis, the trade-off between losing one life and saving a lot more seemed to be a pretty good deal to Mr.Dawson. And that’s how George became a hero! In a sense, while Dawson and Peter were not literally in the war, but they were certainly engaged and they were willing to make that sacrifice. They thought of themselves as soldiers and George’s life was the price of their mission and it became pretty evident when one of the soldiers they saved told Peter “you did the best you could”. And Peter’s reaction was also identical to soldiers in the war who recognize that in the middle of a battle, human life is a dispensable commodity; you do the best you can and you move on; you can’t linger. But I guess a stronger test of Mr.Dawson’s sacrifice would have been a situation where Peter, his son, instead of George, was dying? What would have he done? Farrier, Tom Hardy’s character, makes the biggest sacrifice. He continued to provide aerial support for the evacuation despite the fact that he knew he’s gonna run out of fuel. He was eventually captured by the German troops and his grim fate is left to our imagination.

The characters can broadly be categorize in two groups: those who are mainly trying to survive and those who are sacrificing for a greater good. Alex is perhaps on one extreme in that he only cares about his own survival. On the other side of spectrum is Farrier who made the greatest sacrifice. The rest are somewhere in between. Tommy is mainly trying to survive. He, along with Gibson pretend that they are medics by taking a wounded soldier to a ship to get off the shore. But throughout the movie we get some hints that he has some moral codes. He’s not a sell out. He protects Gibson to the extent he can. One gets the impression that Tommy is the main character of the movie; but is he? Is he truly a hero? He’s not a typical main character in a war movie. At times he seems to be a coward and an anti-hero. Were Mr.Dawson and Peter heroes? Would they have been heroes if they had turned around the ship to save George’s life? Nolan brilliantly challenges what constitutes a hero. He shows the definition of heroism gets muddy in a crisis when one is facing only bad options. And while society treats almost all the war survivors equally as heroes, Nolan pushes back on this idea, and in Dunkirk, portrays the huge variation that exists among them. Particularly, he shows heroes whose stories are never told and are inevitably lost in the war.

If one were to generalize the above idea, using the analogy between life and a battle field, Dunkirk tells us that the truth is hard to come by and is not easily revealed. Most of what we perceive as realities of our lives, is nothing but a subset of a more fundamental reality, which we are not even aware of. This is not because of a conspiracy theory, but simply because, a lot of times, the fundamental factors that constitute the truth are lost in the complexity of the situation.